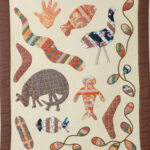 As children, my younger brother and I played on the rocks on the edge of the water at Longueville in Sydney, New South Wales. There were many Aboriginal carvings in the sandstone and we knew them so well. Unfortunately, when I returned several years later they were barely visible and now they are gone. I was also familiar with some in the Bobbin Head National Park NSW. This is my homage to Aboriginal people who recorded the environment in which they lived.

Home dyed calico base. Motifs cut from self made machine strip piecing. Hand appliqué and quilted (stab stitch) to denote the feeling of sandstone. Hand finished. Materials include cottons, furnishing fabrics, polyester wadding with furnishing weight wadding in the border.