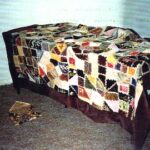 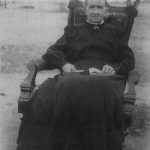 The quilt was made by Janet Paterson about 1857 in Victoria. It has been owned by the Paterson, Boyd and Brook families. The Brook family donated the quilt to the Euroa Historical Society. "Janet Blanche Gerard born 1831?, died 1922. Born Newcastle on Tyne England, daughter of John Gerard and Betty (Leuring). On the 21 July 1852, the 'Flora' a sailing ship sailed from Liverpool under Master Charles Cobb. The ship arrived at Point Henry VIC on the 2 October 1852. Amongst those who waded ashore was one Janet Gerard, nursemaid, from Edinburgh, Scotland, literate, Presbyterian, age 21. Janet first worked in a kitchen, then she was placed in a shop as a salesgirl. Janet's first marriage was to a George Bligh, three children came from this union, one at least being a daughter called Janet. Apparently on being confronted with his 1st wife, Janet left the children in the care of her grandparents and emigrated to Victoria. On the 20 April 1853, marriage of James Chalmers Paterson and Janet Blanche Gerard. Shortly after the marriage they moved to Colac and lived for a time in the Police Barracks, a life Janet found distasteful. With the impending birth of their 1st child they left Colac, James presumably left the police force and returned to Geelong. Between 1855 and 1864 they wandered to the goldfields at Buninyong, Smeaton and Derby.
Janet and James had eight girls and two boys. One of these girls Eliza Gray Paterson was born 13 October 1857, my great, great, great grandmother. It is believed there was a quilt made for each daughter.
Eliza Gray Paterson married John Cunningham Boyd (born 185?, died 1926) on the 17 March 1880 and they had seven children. The first child was James Houston Boyd born 9 December 1880 and he married Eliza Mitchell on 22 May 1900. They had two children by his 1st marriage, John Boyd and Merryn Eliza (born 9 August 1903) (my grandmother). She married Charles Henry Brook on 17 March 1928 and they had two sons: Graham James and Maxwell Charles (my father). On the death of my grandmother (Merryn Eliza) it was decided by the Brook family to donate the quilt to the Euroa Historical Society.
As a child I can remember the crazy quilt on the spare double bed in the centre of my grandparent's house. How my grandmother got this quilt is a mystery. The quilt may have been handed down by Jesse Boyd (great grandfather's sister) or himself (James Houston Boyd). My father can recall a Nina Paterson's name being mentioned but is unable to say what actually happened."
[Robyn A Snowdon - great, great, great granddaughter of Janet Blanche Paterson, February 1998]
References: Paterson Family Genealogy compiled by Geoffrey M Young 14 May 1975
"NB:
* Flo Rollison is another descendant [and] she did have a quilt but it was burnt in a fire, she still has the sachet.
*Joy Lane descendant of Jessie Paterson has a quilt and sachet.
*Sheila Porter from East Malvern rang me last year, she has a quilt. Janet Paterson was her great, great grandmother."

Crazy patchwork quilt with patches of velvet, satin and silk joined in twelve blocks. Each seam is embroidered and many patches have embroidered flowers. There is a 140mm maroon velvet border. The backing is maroon silk. There is a sachet that belongs with the quilt.
1800 x 1400 mm