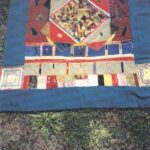 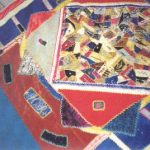 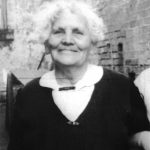 The quilt was made by Margaret Smith (1857-1950) probably in Sydney NSW and probably in the 1920s or 1930s. The quilt was owned in the past by Victoria Caines (maker's daughter) then Walter and June Caines (maker's grandson) and now Maria Finlayson, great granddaughter of the maker. "My father (maker's grandson) was in the Boy Scouts, so I suspect the Scout badge on the quilt was his. Margaret Smith was the generation that was devoted to the royal family and thought of England as the Mother country, though they were born and bred in Australia and had never been there. This could explain the union jack. She had a hard life. She returned to Australia with her only child (my grandmother) after some time in New Zealand. Her husband was supposed to meet her on the wharf but he didn't show up and was never heard of again. She worked as a cleaner to support herself and her daughter. She was a strict Methodist and a very gentle person. My father had very fond memories of his tiny grandmother."
[Maria Finlayson, 28 April 2000]

Crazy patch with frame centre set on point; worked in silks. Surrounding area pieced mainly in velvets and corduroys, with some more silks. A wide border of bright turquoise corduroy. Seams are covered with feather stitch. Quilt includes boy scout badge, union jack badge, Indian type medallion and initials 'IOR' in metallic thread. There is no padding and it is backed with green gingham.
1730 x 1325mm