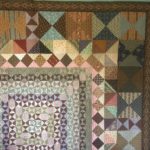 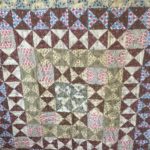 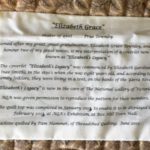 "The existence of this quilt/coverlet was bought to the attention of the Australian Quilters Association Inc. by member Mary Vassos. In a casual conversation at Mary’s retirement function, one of the Board Members asked Mary what she was going to do now that she had finished work. Mary explained to her that she was a quilter and therefore had plenty of projects to keep her busy. The Board Member told Mary that she had an old quilt that belonged to one of her ancestors and would Mary like to see it. She said that the family history of the quilt was that it had been started in 1835 by Elizabeth Smith when she was eight years old while living in a tent on the banks of the Yarra River, Melbourne.

The quilt/coverlet was dropped off to Mary the next day in a black plastic garbage bag. I was contacted by Mary who knew that I had an interest in antique quilts and was also a member of the Victorian Quilters Quilt Study Group. I was then invited to her home to see it. When the quilt/coverlet was removed from the plastic bag, there was much excitement as we found it to be in very good condition for its age and previous basic storage. The owner was contacted and asked if I could take it to the Quilt Study Group to show them and have the age of it verified.

Janet O’Dell, who heads the Victorian Quilters Quilt Study Group was able to date the fabrics to the 1830’s, some being a little older and some being a little newer. Janet has quilts in her collection [from that period] with similar fabrics and designs that she had purchased from England.

The owner was contacted with this information and a meeting was held to advise her of the importance of this early piece of Australian textile. As a result of this meeting the quilt/coverlet was fully documented and the owner contacted the National Gallery of Victoria to offer it to them to become part of their collection, where it is now resides.

As a thank you to the Australian Quilters Association Inc. for the time and commitment in this process, the owner very kindly agreed to our request to produce a copy of the pattern for Members use only."

Maker of quilt .. Prue Townley, a member of the Australian Quilters Association.

"Named after my great, great grandmother, Elizabeth Grace Townley, b 1811 and to honor the names of two of my great nieces, this is my interpretation of a coverlet previously known as 'Elizabeth’s Legacy' and now as the 'Elizabeth Smith Coverlet' in the care of the National Gallery of Victoria. [See above]

The 'Elizabeth Grace' quilt top was completed in January 2012 to enable it to be displayed at AQA’s Exhibition held at the Box Hill Town Hall, Victoria in February 2012."

The fabrics in the centre eight rows are similar to those used in the 'Elizabeth Smith Coverlet' with outer border fabrics and colors of my choice.

The pattern was drafted from the 'Elizabeth Smith Coverlet' by the Australian Quilters Association with the permission of the owner.