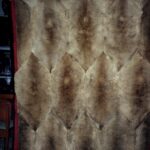 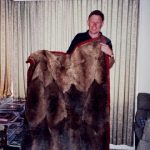 Russell McNickle and other family members shot the kangaroos at Hillston NSW and Mr Hartley Schultz tanned them at his well known Wagga Wagga NSW tannery and made the rug. It was originally owned by Kenneth Johnson and is now owned by his mother Betty. It is not used but has always been at the Blamey Street house and was in general use until about 1970. Russell McNickle shot the kangaroos on Milthorpe's property 'Walanthray' Hillston NSW with a 22 calibre BRNO rifle in 1958. The skins are from the big red, the grey, the black scrubber and the blue flyer. No licence was necessary to shoot the roos. Russell salted the skins down and they were then taken to the Schultz tannery in Wagga Wagga where Hartley Schultz was responsible for tanning, design and making the rugs. Russell bought the rifle (and bullets) for 60 pounds and paid for it within a year by trapping and shooting rabbits and shooting roos. Jarvie and Kelvin (McNickle) also shot and skinned the kangaroos.

Pieced kangaroo skin rug. Three rows of full skins all from 'black scrubber' kangaroos. Skins are evenly matched to form triangular peaks either end into which the next row of skins fits The backing is burgundy felt with traditional scalloped edge.
1800 x 1200mm