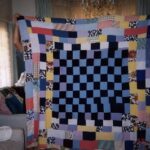 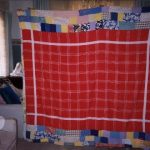 The quilt was made by Una Kerr in Melbourne Victoria c. 1960. She gave it to her friend Jillian Towers. It is generally not used now "except for short periods of display and admiration".
[Jillian Towers]
"Una Kerr was born in Rochdale, England in approximately 1922. She became an orphan as a very young child and went with her two older sisters, to an orphanage in Kendal in the Lake District. The girls were trained in domestic duties and at the age of about sixteen, Una found a position in a large private home in the district. She remained in domestic service until the outbreak of World War II, when she joined the Royal Women's Air Force. She remained in the Air Force until demobilisation after the war ended and returned to domestic service.
About 1953 she applied for immigration to Australia, (at the cost of 10 pounds) and settled in Melbourne Victoria, still occupied in domestic service to earn her living. It is about this time she met the family of the current owner of the quilts and became a close friend.
The owner of the quilts remembers as a child watching and learning from Una as she performed many needlework projects including rug making, embroidery, and tapestry. She also made many of her own clothes. All her sewing was by hand as she did not own a sewing machine, nor did she want one. Una never married. Until she could afford to purchase her own villa unit, Una lived in a small caravan and whilst there, for practical purposes, made these quilts from scraps of fabric collected from various sources. The quilts were used for bed warmth. Una died suddenly in 1995 whilst still leading an energetic and active life pursuing her interests in sketching, photography, walking and love of nature."
[Jillian Towers, 12 July 1999]

Hand pieced patchwork quilt with blue and black checkerboard central frame surrounded by four borders of irregular sized rectangles. Mainly dress materials with possibly some furnishing material. It is not quilted or tied. The backing is a large rectangular red check table cloth with three borders of irregular shaped pieces down two sides and one border down two sides. There is no padding.
1860 x 1730 mm