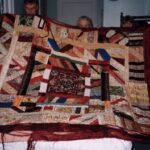 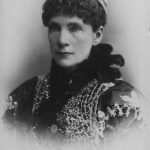 The quilt was made by Jane Calder (born Bennett) in Melbourne Victoria probably just before the turn of the century. Jane was known as 'Mater' in the family. It descended through the maker's family and came to Lorna Calder on the death of her mother-in-law in 1948. The quilt was found in an old tin trunk in the cellar of her Melbourne home in Grey Street, St. Kilda VIC. In 1980 Mrs Calder had the quilt repaired for her daughter Morella's return to Australia and it was used in her Balmain home. Additional initials relating to Mrs Calder's family had been added by the Austrian needlewoman, Soula, who did the repairs. The quilt came back into Lorna Calder's hands on the death of her daughter. It is not used. The Calder family were from Edinburgh. Jane Bennett married William Henderson Calder in about 1860 and they went to New Zealand. She had nine children in New Zealand and they returned to Scotland in 1875. After a year or two the family came to Australia and settled in St. Kilda VIC in a large house that still stands in Grey Street. Unfortunately, much of the information about the quilt died with Lorna Calder's mother-in-law.
[Based on informal interview with Lorna Calder by Kylie Winkworth, 15 September 1999]

Patchwork quilt of multi coloured silks and brocades. Crazy patchwork borders, mainly rectangular fabrics pieced together in diagonal patterns, radiating from a central frame embroidered with flowers. Many pieces are extensively embroidered in a great variety of stitches and motifs: butterflies, sunflowers, cats, daffodils, crown, pawn broker's symbol, 'money to lend', 'good night', the initials of family members and 'mater 1890'. The quilt has a deep border of maroon sateen. There is no padding visible but it is possibly a blanket. The backing is green/gold silk with a self stripe with red cotton damask showing underneath, possibly an earlier backing.
2165 x 2165mm