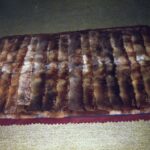 The rug was made at the Schultz Tannery, Wagga Wagga, NSW, c. 1945. It was owned by Eric Roberts, then his daughter, Wendy Hucker, now owned by her daughter Beth Hoskins (Hucker), Goulburn NSW. Eric and Nan Roberts obtained one of the first commercial radio licences in NSW during the depression, 2WG Wagga Wagga. They worked hard and the station just survived and then prospered. Eric was a recreational shooter of foxes and rabbits, he was regarded as a fine shot. The rug was made at the Schultz Tannery Wagga*. It was in constant use in the flat behind the studio of 2WG where Eric and Nan lived with their daughter Wendy. It passed to Wendy during their lifetime and was loved by one of Wendy and Walter's (Hucker) daughters, Beth, who loved having it on her bed and called it 'Mr Fox'.

*The Schultz Wagga Wagga Tannery [notes from Harry Schultz February 2000]
The German side of the family came out about the 1930s, when many other Lutherans came to South Australia. They were furriers, tanners and dyers in Germany. My dad said he was apprenticed to his uncle in Bordertown. He ran away and crossed the 90 mile desert with some lemons and 3 dogs. He was William Adolf Schultz, born about 1880, died about 1960. Mother, Anne Sophia Hood, was born in Bordertown [and] her father struck gold at Ballarat, 'not lucky but consistent'. The family went to Albury but by about 1911 were also farming and investing in Wagga, but all that collapsed in 1929. Harry's father started the tannery in Albury but then shifted to Wagga for good about 1930. Before the Depression fur coats were the 'in' thing. The Wagga tannery started as a backyard business near the Waterworks. Father made the coats and mother employed dressmakers to do the linings. At one stage they had a workroom above Kelly and Cunningham's in Fitzmaurice Street. The skill of a furrier is as a cutter and being able to match skins. If you made a pattern you knew what you were working to. There were ten children. Four brothers and a brother-in-law went to the war. Hartley lost his arm with a bomb.
WWII was a turning point for the tannery as the Yanks were stationed here at Kapooka. They all had money and wanted something Australian so kangaroo and possum rugs were very popular. The tannery moved to Hammond Avenue (the caravan park is now part of it). The tannery site was fairly recently sold to Noah's Ark. Pre war the business was mainly coats and after the war mainly rugs. Hartley gradually took over from his father. Harry would often do the heavy work like fleshing. Acid does the tanning and there are many types of acids: alum and salt, tea leaves, ash. Wattle bark was very popular for tannic acid. There was a big trade for stripping bark for export. We used to go out stripping bark. At certain times of the year moisture coming up from the roots starts new growth and that's when you cut the bottom part and strip up into long lengths and leave to dry out. We would go back in a month or so and get the dry bark. It would then be chopped into small pieces, boiled up and the fluid drained off into casks. This was the tannic acid. Black wattle was stronger in acid. There were many trade secrets handed down to do with tanning. After the war wattle bark (tannic acid) was imported from South Africa in large blocks (like cheese) so getting wattle bark in the bush ceased. Father was about the only one who knew how to regenerate skins so he would get them cheap. Police would confiscate skins of protected animals but then the skins would turn up at the sales. Father might buy a couple of hundred skins at winter sales and then make them up in summer. Possum skins were very warm. Kangaroo fur didn't wear well but the hide is long wearing. The best wearing skin was from the native cat and Dad would pay 9d or 10d for these. Platypus are and were protected but trappers still used to trap them. They are silvery grey on the stomach and dark grey on the back. Skins would be slit up the back so the silvery grey would be in the centre.

Fox skin rug made from centre backs of pelts. Sixteen skins running the width of the rug and a 40mm fur border. The backing is tan felt with a pinked edge (traditional in this type of fur rug) and this is joined to the rug with a doubled blue felt binding. The skins are very fine quality winter skins.

This is a historical record and cannot be modified.