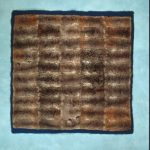 "The maker's name is not documented, but was probably Mr Albury Treanor and/or his wife. The skins came from possums shot in the early 1930s by Albury Treanor, who lived at 34 Underwood Street, Forbes NSW. They were tanned by Pulbrook of Bathurst. The rug was hand stitched and used by the Treanor family on their beds. The rug was a gift from Mr Pat Williams to the Powerhouse Museum in 1987. Pat Williams was probably the husband of Fanny Bruce Williams, nee Treanor, from whose collection the rug came." Kay Williams, Pat Williams' daughter commented [that] "the family owned four skin rugs on their beds including fox, kangaroo and rabbit. The skins for these were mainly shot at Grudgery Mountain, 30 miles west of Forbes. Twenty men would go out in an old truck at about four in the morning and shoot until ten am. Much of the family's life revolved around shooring and fishing." [] [PHM]

"Possum skin rug made from rectangular pelts of possum skin, pieced to form an almost square rug. The skins are hand stitched onto a royal blue felt backing with pinked edges. On the reverse, a machine woven brown braid has been applied as a border decoration with loops of braid at each corner and a braid quatrefoil medallion in the centre." [PHM]
1600 x 1585mm