Adam and Eve in the Garden of Eden 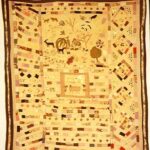 The quilt was made by Mary Jane Hannaford about 1924 at Blanford, near Murrurundi, New South Wales. "There are seven known quilts initialled 'M.J.H.' five of which are owned by the National Gallery of Australia. The National Gallery of Australia purchased this quilt from a private collector, Sydney in 1982. Mary Jane Hannaford was born in Devonshire, England in 1840. She came to Australia on board the 'London', arriving in Sydney in March 1842. The family moved to Tamworth after the Australian Agricultural Company contracted her father as [a] shepherd. Her father died in 1852 when Mary was 12. Her mother remarried two years later and they moved to Blanford near Murrurundi NSW. Mary Jane lived with her parents until they died and continued to live with her brother on the farm 'Balmoral'. She never married but had a daughter, Emily Agnes Hannaford who married George Cady in 1887. Mary Jane died in Blanford in 1930." [NGA]

"A coverlet of 7 pieces of cream muslin. The edges of the work are secured at the top and sides with bands of green and floral strips. The lower edge has been turned and hemmed. The 'quilt' is highly decorated with bands and diamonds of appliqué fabric. The upper centre field is appliquéd with images depicting Adam and Eve in the Garden of Eden surrounded by trees and a variety of animals and insects. In the centre is a smaller appliquéd image of the manger with mangel and cows. The quilt is not signed or dated but each of the imaged areas is accompanied by a descriptive text. The writing is executed in black chain stitch. Beads and sequins have been used to depict the eyes of some of the animals in the Garden of Eden. As with all of Mary Jane Hannaford's quilts all work is hand sewn and quite crude and coarse in execution. The quilt is not padded or lined." [NGA]
1810 x 1590mm